A celestial hierarchy was devised and organised by sixth-century theologian Dionysius the Areopagite and adopted largely by the Christian Church. According to Dionysius, the Areopagite there is 3 Spheres and 9 Choirs 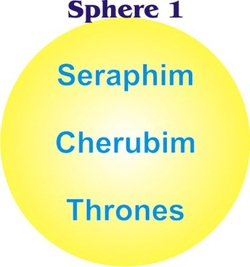 Sphere 1
Seraphim
Seraphin are ruled by: Seraphiel (Prince of Peace), Metatron, Jehoel, Uriel, Michael and Lucifer (before he fell from grace)
Seraphim surround the throne of God. They have little contact with earth, as they are Heavenly counsellors – guardians of the Light throughout the universe. They keep the celestial records. Their essence is pure love.  They surround God constantly singing praises.

Cherubim
Cherubim are ruled by: Zophiel, Ophaniel, Rikhiel, Cherubiel, Raphael, Gabriel and Sata (before he fell from grace)
These cosmic beings hold the energy of the Sun, the Moon and the stars. They are most powerful and awe-inspiring of all angels. Their knowledge and wisdom are considered so great as to be utterly incomprehensible to the mortal mind.

Thrones
Thrones are ruled by:Tzaphkiel, Zadkiel, Raziel, Jophiel and Oriphiel
The most powerful angels in the service of God, and come the closest of all to spiritual perfection. They are described as a whirlwind, a great cloud of fire, their wings joined to one another like great fiery wheels full of eyes. They carry the energy and fulfil the Divine justice of God. They emanate the light of God with mirror-like goodness.
They receive direct illumination from God and  are transformers of divine wisdom into a level that humanity can accept.  They look after and guard the planets. 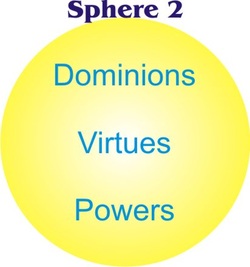 Sphere 2
Dominions
Dominions are ruled by: Zadkiel, Muriel, Yahariel, Hashmal and Zacharel
The duty of this heavenly host is to oversee the lower angelic hierarchy and act as a channel for God’s love through the energy of mercy, wielding power without oppression. They traditionally wear green and gold and their emblems of authority are a sceptre or sword in their left hand and a staff of gold in their right, thereby denoting their lordship.
They act as channels of mercy and help us to move into the spiritual realms.

Virtues
Virtues are ruled by: Uriel, Cassiel, Gabriel, Michael, Uzziel, Tarshish, Sabriel and Peliel
They work miracles on earth, bestowing valour, inspiration and courage. On earth they maintain a watch over nature, marking and guiding every facet of natural life and weather patterns.
The Virtues are sending huge beams of light to earth to facilitate the changes in consciousness now taking place.  As you work with them, there will be greater amounts of spiritual light available for us all.

Powers
Powers are ruled by: Chamuel, Sammael, Camael, Ertosi, Verchiel, Gabriel, Verchiel and Satan (before he fell from grace)
Their task is keeping demons under control and preventing demons from overthrowing the world. Often seen as the Angel of death and rebirth and the Lord of Karma. They guard the pathways to Heaven and guide lost souls back. 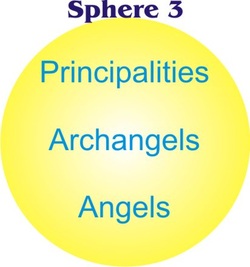 Sphere 3
Principalities
Principalities are ruled by: Haniel, Anael, Cerviel, Requel, Amael, and Nisroch
They are the guardians of nations, watch over countries, towns, villages and sacred sites.

Archangels
Archangels are ruled by: Metatron, Raphael, Michael, Gabriel, Barachiel, Jehudiel
Known as the ruling angels. They control and harmonize everything in God’s creation. Archangels operate on many different levels at once - they are messengers bearing Divine decrees. They direct the will of God; ignoring one of His divine messengers is perilous

Angels
Angels are ruled by: Gabriel, Chayyliel, Phaleg and Adnachiel
There are millions of angels helping in many different tasks. They guard all people and physical things. They include the angels of love, joy, courage, peace, hope, faith, freedom and harmony. Our Guardian Angels come from this Choir.

Compiles by Nina Ganci
Back to Home Page

Contact Nina Ganci
Connect with your Guardian Angel, feel his loving wings surrounding and protecting you.